At work, we use kube-aws to deploy our Kubernetes clusters running on top of Container Linux inside of AWS. I wanted to be able try new things with Kubernetes in my personal lab without having to rack up huge AWS bills, so that means figuring out a good way to deploy Kubernetes to baremetal in the least painful way. I wanted to try Tectonic because it offers a simplified graphical installer, and that means I also need to install Matchbox to support the baremetal provisioning aspects.

After reading through the entire Tectonic Installation Guide, I realized that it doesn’t cover some of the underlying OS provisioning components as they vary per environment. Since I don’t have that infrastructure as I’m starting from scratch, I had to get that going before continuing the installation. Here’s my summary of steps taken (including a custom dnsmasq container) to round out a full working guide.

My personal lab is a mixture of PCs, 1U servers, and Mac hardware. So, for this lab, I’m going to pick one of each to ensure the entire process would work on all my hardware.

As per the installation guide, Tectonic needs three systems at a minimum. Here are my systems per role:

The simplistic network environment is as follows: 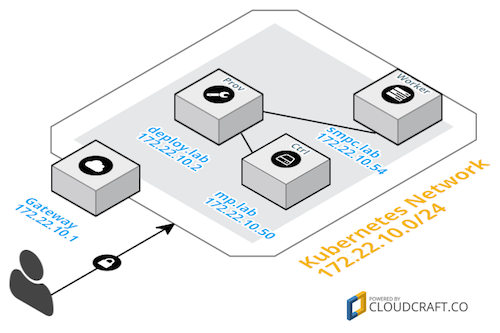 The following describes the complete baremetal provisioning process from DHCP request to CoreOS installation. Configuring the provisioning system to support this workflow is described in the subsequent section.

There are several components that run on the deploy.lab system that all need to work in concert for the above process to be successful:

I hand installed Centos 7.3 with the minimal install and ensured that it had a recent version of Docker with SSH key authentication as the admin user in the docker group:

Installing and Configuring the Matchbox Container on deploy.lab

The matchbox documentation for running via docker is a bit misleading as it actually requires several things to be completed before actually running the container.

First, create the matchbox user and create/own the /var/lib/matchbox directory where it will keep all the assets and profiles.

Download the matchbox package, verify its signature, and untar it:

Run a script to grab the version(s) of CoreOS/Container Linux to the current directory and then copy them to the assets directory to be available via matchbox on port 8080:

Drop out of the matchbox installation directory and run it via docker:

Finally, verify that matchbox is running and able to serve up your downloaded CoreOS image(s). If you see this, you should be good to go:

It’s easiest to grab a copy of the repo and build your own docker image locally.

Edit the files in files directory as needed. Most changes are IP addresses, MAC addresses, and hostnames for your environment:

Finally, build and run the image:

With the above in place and a free license from CoreOS for Tectonic, you can now follow the Tectonic Baremetal with Graphical Installer guide having satisfied the pre-requisites–with one exception.

Notice the args section. When the system is booting from the network and pulls the /grub?mac=XX:XX:XX:XX:XX:XX configuration, this args list is directly dropped into the kernel line. However, the uuid and mac:hexhyp variables are ipxe boot environment specific. For grub2, it actually varies slightly. To fix this, we need to make some customizations to the matchbox groups configuration files. I chose to make one for each system based on the mac address selector. Notice that I now reference the coreos-install-mp or coreos-install-smpc profiles:

We also need to make those renamed profiles. Notice the variable $net_efinet0_dhcp_mac for UEFI/Mac hardware and the $net_default_mac variable for BIOS booting hardware. Also notice that I made another unique ignition template to install to /dev/sdb instead of /dev/sda for the smpc.lab system:

Once the above changes have been made, you should be able to successfully PXE/Netboot the systems and continue on with the final portion of the Tectonic installer. If you run into issues, double-check your formatting of the profiles and groups as well as hitting the /grub and /ignition endpoints with the proper parameters to see what configurations are being provided to your systems.

Congratulations! You should now be able to hit the web UI of the Tectonic Console, use kubectl, and ssh into the systems using the core user and the SSH key you supplied. I hope this helps you understand what’s going on behind a fairly sophisticated and easily customizable baremetal Container Linux and Kubernetes installation system.